On Dec. 13, 1993; as she boarded the flight for the USA, lest known to her the Universe had planned a very different voyage. A voyage which spanned over 15 years, and even though it involved only three countries on two continents, it showed her the ‘entire world’ within herself. A journey which showed her the best aspects of humanity and at the same time also put her thru many trials, tribulations and many a times, tested the very core of her existential being. Her only guidance thru this unique voyage was her ancestral-teachings, the ones she received as a child and all the new information which was so-called ‘given’ to her by her Rishi spirit guides.

Soon she realized that “Life” itself was her guide. AND suddenly all the hustle, all the turbulence and all the mundane mechanics which we typically call “living” stopped. When she actually started listening to life, her guide on this voyage,  she started to understand its way of teaching. Soon,  “Life” started revealing to her the threads of its mysterious ways. Insights seemed to flow to her. Life started speaking and she started taking notes. She knew that all of this information will help everyone else as well.  Now she needed to be the messenger who takes all this information and insights to people.  So,  Maitreyi was born. .. in service to the Universe and to carry out the task of helping her fellow travelers on their own journeys thru life, their own trials and tribulations. She would like to thank all those hundreds of people who played the various ‘roles’ in her life, who helped her learn her lessons and who allowed her to finally see the very face of God, the Divine, the Universe- all within oneself. Just like the entire outer cosmos in its informational content is all contained within the atom.

This site, Maitreyi Paradigm has been created to express and convey Maitreyi’s lessons, thoughts and teachings. It will give readers a glimpse into her world and hopefully will inspire them to attempt to live a magical life full of happiness and possibilities… 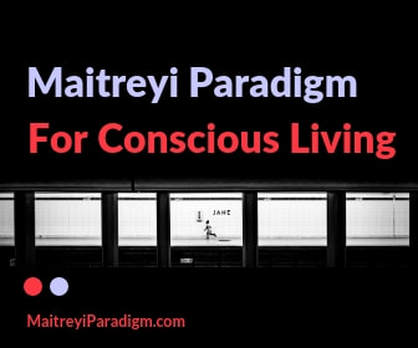 Note:    All of these teaching are not necessarily ‘new’, but many a times the way in which it is communicated is definitely new- the words it seems were provided to her in a way which will allow our Tech-savvy and Cable-ready culture to understand and assimilate with ease.  Also note that in this new-age days where there are many books and information written thru channelling etc., it is NOT the case with Maitreyi. She prefers to call this information as ‘being provided’, since she would like people to recognize the Universal Consciousness as the source of this and all other knowledge and information.
​